SEOUL – The 2020 Tokyo Olympics, the sixth summer games to be held in Asia, will feature just five new sports. Out of a total of 26 sports proposed to the International Olympic Committee for inclusion, only skateboarding, baseball (restored after a 12-year hiatus), surfing, karate and sport climbing were retained. There is however a push to see some traditional Asian team sports such as sepak takraw and kabbadi, included as events in the upcoming return of the Olympics to Asia.

These sports are little known internationally but are already known during the quadrennial Asian Games. There is still a very long jump to the Olympics. Additionally, securing a seat at the Olympics can be costly, with some sports paying international public relations agencies up to $ 500,000 to campaign for inclusion.

If successful, the returns on these investments are clear. Being designated an Olympic sport not only results in greater visibility, more media coverage and increased participation, but also entitles the sport to a share of the IOC’s commercial revenues, funding for National Olympic Committees and income from agreements. sponsorship and dissemination.

For a new sport to be approved by the IOC for inclusion, which also implies the abandonment of an existing sport, it must meet official criteria, defined as “governed by an international federation which undertakes to follow the rules of the Olympic Charter, a condition of recognition by the IOC, it must also be practiced widely around the world and meet various criteria.

Sepak takraw, or foot volleyball, involves a team of five players throwing a small rattan ball over the net into the opponent’s court. It is perhaps the best-placed sport to move from the Asian Games to the Olympics. It is already popular in Southeast Asian countries and Asia also hosts other forms of footvolley games, such as jokgu in Korea. Similar sports are played informally on beaches and in parks around the world.

“It’s a huge sport in South East Asia and especially in countries like Thailand, Malaysia and Indonesia,” Preman Parameswaran, who led the sepak takraw league for Malaysian broadcaster Astro, told Nikkei Asia. Sport. “It is played in all schools or at least in the majority of them and it is part of the [Malaysian] the government’s plan to popularize the sport. He added: “It would be a dream come true for the sport to be played at the Olympics. “

Preman believes that sport must become more professional if the Olympic dream is to come true one day. The recent infighting within the ruling federation is not helping. “The association must play a more important role in the development of sport and there must be less politics. The governing body must restructure and have more qualified people to promote and develop the sport,” he said. Explain.

Abdul Halim Kader, managing director of the International Sepak Takraw Federation, said a first step would be to include sport in the 2030 Youth Olympic Games, which are scheduled to take place in Thailand, and to prepare for the Olympics summer, perhaps on their return. to Asia. But the ISTF has not yet been recognized as an international federation by the IOC. “We are working in this direction. We hope to be recognized in the next four years,” said Halim recently. “It’s not easy, but our goal is to take sepak takraw from a village sport to an Olympic sport.” Another touted Asian sport is kabbadi, a fast-paced game popular in Southeast Asia where teams of seven try to venture into opponent’s territory and hit as many rivals as possible.

An effective way to grab the attention of the IOC is to include sports that appeal to a new generation of players and viewers such as bike motocross, or BMX, skateboarding and surfing. “We want to bring sport to young people. With the many options available to young people, we can no longer expect them to come to us automatically. We have to reach out to them,” said IOC President Thomas Bach. , when he announced the new fashionable sports that were selected for the Tokyo Olympics.

Potential Olympic sports contenders should keep in mind that the Olympics are a business, said Simon Chadwick, global professor of Eurasian sports at Emlyon Business School in Paris. “It is up to kabbadi and sepak takraw to establish a business case for their inclusion,” he explained. “New sports like BMX, snowboarding and break dancing reflect the needs and expectations of new generations of consumers. The IOC tries to integrate the most popular sports in the world, in terms of participants, number of top athletes and spectators. This brings a wide range of countries that can compete for medals, which is also important in terms of the IOC’s sale of media rights, broadcast rights and sponsorship agreements. “

The importance of popular appeal to young people was demonstrated in the selection of break dance for the Paris 2024 Olympics and skateboarding for the Tokyo Olympics. More traditional sports, such as squash, which has been campaigning for Olympic inclusion since 2000, are finding it increasingly difficult to be accepted.

“Skateboarding didn’t even have a national governing body when it was chosen as an Olympic sport,” former squash star Nick Matthew said. “It shows a massive disconnect of the IOC from the real sports infrastructure.… We should have been part of the Olympic movement years ago.” 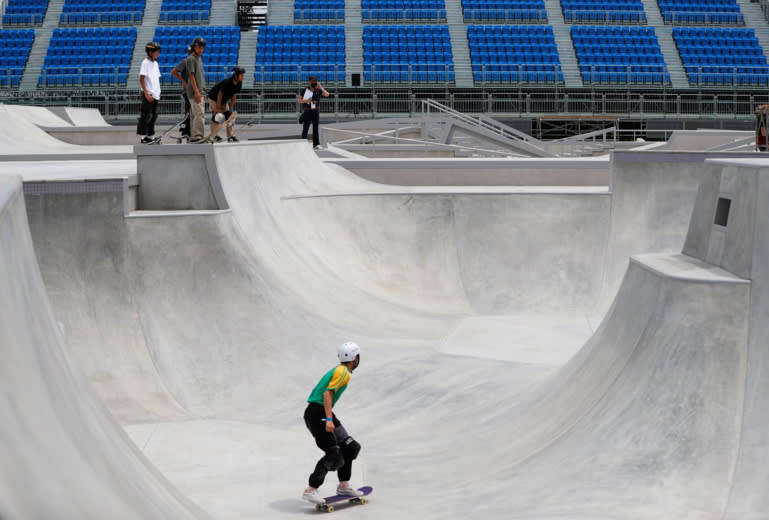 Top: Skateboarders prepare to compete in a test event for the Tokyo Olympics at Ariake Urban Sports Park in Tokyo on May 14. (Reuters) Below: A break dancer puts on a show in the French capital at an event in June 2019 celebrating the sport’s entry into the 2024 Paris Olympics (Getty Images)

Kabbadi’s biggest challenge is to persuade the IOC that the game is being watched to a large extent outside of his South Asian home country. “Creating a global culture of consuming and participating, or making the case that there is this culture, is really important,” Chadwick said.

It looks like sepak takraw and kabbadi may have a long way to go in achieving their Olympic dreams, but there is still hope that the whole world will one day watch some of Asia’s most exciting and yet relatively unknown sports. .

The Tokyo Olympic Games: sport through the ...

This softball player wants to represent the ...