Iron Age dagger and 700 year old village found in Scotland under the motorway!


Four buildings, belonging to a medieval Scottish colony, discovered under a highway in Scotland in 2016 had “no chance” of being destroyed in the past 700 years. They were “magically protected” by an Iron Age dagger which archaeologists say was a talisman applied in battle against evil supernatural forces.

On Friday February 26, 2016, The Scottish honored iconic British comedian Ronnie Corbett with the joke of the week. Corbett said: “We just heard that an onion heavyweight threw its load all over the M1. Motorists are advised to find a hard shoulder to cry on. However, if you were to mourn on a particular motorway on the M74 in North Lanarkshire, Scotland, your tears would fall on a 700 year old medieval Scottish settlement.

Remains of the medieval Scottish settlement, dating from the 14th to 17th century AD, were found on a hard shoulder known as Netherton Cross, near Bothwell in North Lanarkshire, Scotland.

A recent article in The Scottish says the find is “remarkable”, not only for the range of buildings from different eras, but for the quality of the artifacts recovered from the roadside site.

Among the ancient tools unearthed at the medieval Scottish colony site was a spindle spindle, spinning threads and a whetstone for sharpening agricultural blades that were once spat out.

Archaeologists have also found evidence of smelting iron, refining flowers, and forging based on a collection of nails. And in the archaeological layer of the 17th century, two coins were found.

However, the crown jewel of this find was an ancient iron dagger. GUARD Archeology’s Dr Natasha Ferguson, one of the co-authors of a new report on the discovery, said Smithsonian that the ancient weapon was not used for fighting, but to “protect buildings from ‘magical’ damage.” 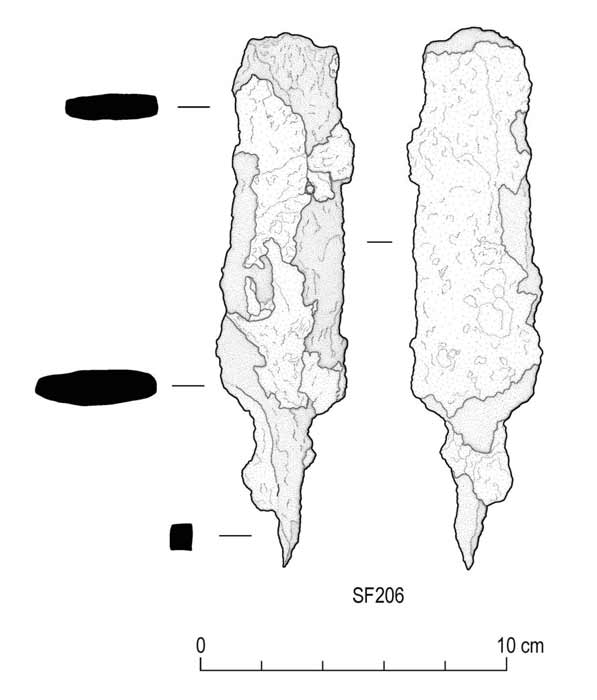 The outline of the Iron Age dagger found at the Scottish medieval site of Bothwell. ( GUARD Archeology )

The Iron Age Dagger Protected Colony of All Demons

Dr Gemma Cruickshanks, of National Museums Scotland, said the dagger was covered with a sheath at the time of her burial and was “intact and still usable at that time”. It is believed that the dagger was made in the Iron Age and was carefully placed during the medieval period on this site in some ritual of some sort.

Regarding the nature of the magic applied here, the researchers speculate that it was “to protect the building and its inhabitants from a real, or perceived, harmful outside force.”

Dr Ferguson said the practice of leaving special items under the floors of medieval and post-medieval buildings “was aimed at protecting the building and its inhabitants from magical damage”. Dr Ferguson wrote that the deposit of these objects below the level of the foundations of one of the houses “was perhaps intended to assert this space as a place of safety for them and for generations to come.” And because the dagger was so old, even in medieval times, it would have had an “otherworldly appeal,” according to the archaeologist. 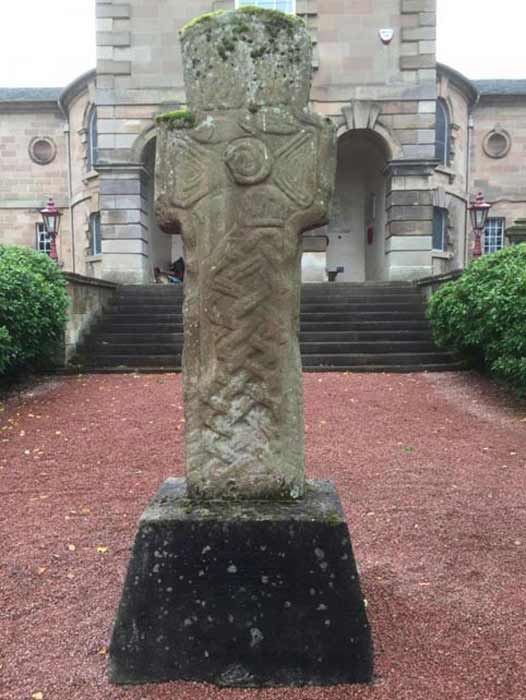 The Netherton Cross was moved to its present location, from where it was originally found near Bothwell, at Hamilton Parish Church in 1925. ( Transport Scotland )

How humans went from hunting to medieval farming villages

Ever since humans began to hunt, and especially with the birth of agriculture, groups of humans have found it very important to appease the spirits. However, in today’s modern world, science has triumphed over the most troublesome “natural” forces, mainly with draft barriers and walls that don’t let the wind in.

And in the new world of farming: Blizzards, snow and ice usually don’t lead to food shortage and Armageddon. But in Neolithic times, without computer-aided design, barometers, weather satellites, and massive indoor agricultural centers and warehouses, magic, ritual, and sacrifice were the only way to actively try to maintain a cosmic balance and, for example, therefore, survival.

With the expansion of farming communities in Iron Age Britain, it became necessary to feed more people, including all field workers and food industry workers, but also builders. , craftsmen.

From small original groups of people making offerings to their gods in specific places which were abundant in natural resources, temporary and then permanent settlements developed near these sacred sites which were managed by emerging religious elites. Through organized rituals, like burying swords under buildings, together, as communities, we first domesticated ourselves, then plants, then vegetables, and finally animals.

It was only then that we got the luxury of free time, with which we designed the Stone Age wonders that today dot British landscapes.

The Chinese nail protector that scored a ...