This Sim’hat Torah, an ancient Czech scroll has returned to its homeland

(RNS) – Rabbi David Maxa first read a Torah scroll eight years ago, during a summer he spent in a camp for Reform Jewish leaders.

Maxa, who was visiting the United States for the first time, did not know it then, but the Torah he was reading was from his home country – in the Czech town of Brno, about 200 km from Prague. He had traveled to Camp Kutz in Warwick, New York, 40 years earlier.

On Tuesday (September 28), that same scroll returned to the Czech Republic, when Maxa and his fledgling congregation in Prague welcomed it into their ark to use as part of their weekly worship service.

The occasion for the return of the scroll is, and rightly so, Simhat Torah (or rejoicing in the Torah), which begins on Tuesday, September 28. The feast celebrates the completion of a cycle of liturgical readings that ends with Moses gathering the Israelites for a final speech before ascending Mount Nebo to die in the final chapters of Deuteronomy. The Jews then roll the Torah scroll to its beginning and begin a new cycle of readings beginning with Genesis 1.

But the return of the Czech roll to Prague also marks a return of a different kind. In the 75 years since World War II and the near collapse of Jewish life in Europe, many of its treasures, including 1,564 Czech Torah scrolls, have made their way to Jewish institutions around the world – the vast majority in the United States and Canada.

Now some of them are going home. Three years ago, a Torah scroll from the Czech Republic was returned to a Jewish congregation in Olomouc, a town in the eastern province of Moravia. And on Monday, Maxa’s congregation in Prague, which rents space in a downtown apartment building, received the 1890 Brno Torah scroll, which was most recently used at Camp Kutz. 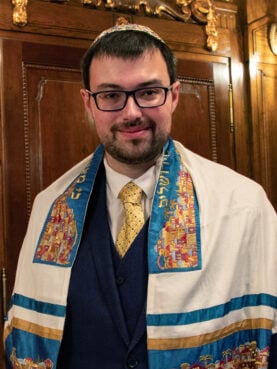 Torah scrolls, written on parchment, or sheets of leather made from the skin of a kosher animal, are Judaism’s most sacred physical object. Their presence in a synagogue symbolizes Jewish continuity.

“The Torah is compared to a tree of life,” said Maxa. “This Torah scroll will become the tree of life for us. I hope my children and others will grow up with this connection.

Some 117,500 Jews lived in the region of Bohemia and Moravia before the Holocaust. Only around 10,000 survived the war.

Maxa’s father was one of them. He returned to Prague after the war, and late in life he had a son. But Maxa did not grow up practicing Judaism in any meaningful way outside of her family’s visits to Jewish cemeteries.

It was only after his father’s death in 2001 that he ventured into a synagogue and began studying Hebrew and Judaism and, he said, beyond ” stigma “of being Jewish to practice it proudly in the open air.

Jewish life in what is now the Czech Republic was almost extinguished by the Nazis. Then the Communists, who followed the Nazis, pushed the entire religious life of the region underground.

The Velvet Revolution overthrew the Communist government in Czechoslovakia in 1989, and the life of the Jewish congregation is finally resurfacing. 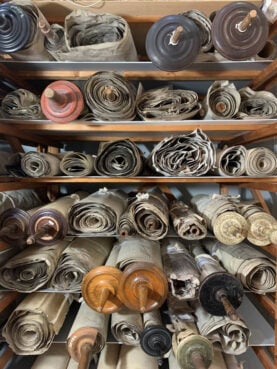 Thanks to a historical oddity, Czech Jewish liturgical objects, such as Torah scrolls, never disappeared during the Nazi and Communist times.

This is because in 1942 the Nazis ordered the Jewish communities of Bohemia and Moravia to pack their Torahs, their gold and silver branches, their books and textiles and send them to the Jewish Museum in Prague.

The Communists then moved the treasure, including some 1,800 Torah scrolls, to a crumbling synagogue outside of Prague. In 1962, short of money, the Communists tried to sell them. Israel declined the offer, but a British lawyer and philanthropist, Ralph Yablon, agreed to buy 1,564 scrolls from the Communists, which he turned over in 1964 to the Westminster Synagogue, a Reformed congregation in London.

The synagogue then established an independent nonprofit, the Memorial Scrolls Trust, which has since loaned scrolls to fledgling Jewish congregations in need.

About 1,000 scrolls have arrived in North America, said Jeffrey Ohrenstein, president of the Memorial Scrolls Trust. Many were in urgent need of restoration, but North American congregations, which grew and prospered, raised funds to repair them.

The Kutz camp, established in 1965, received one of these Czech scrolls in 1974. Hundreds of Jewish teenagers read it during the summers spent at the camp practicing Jewish community leadership roles in the movement. reformist.

In 2019, faced with a financial crisis, the Union for Reform Judaism closed the camp. The question then arose: what to do with his Torah scroll? 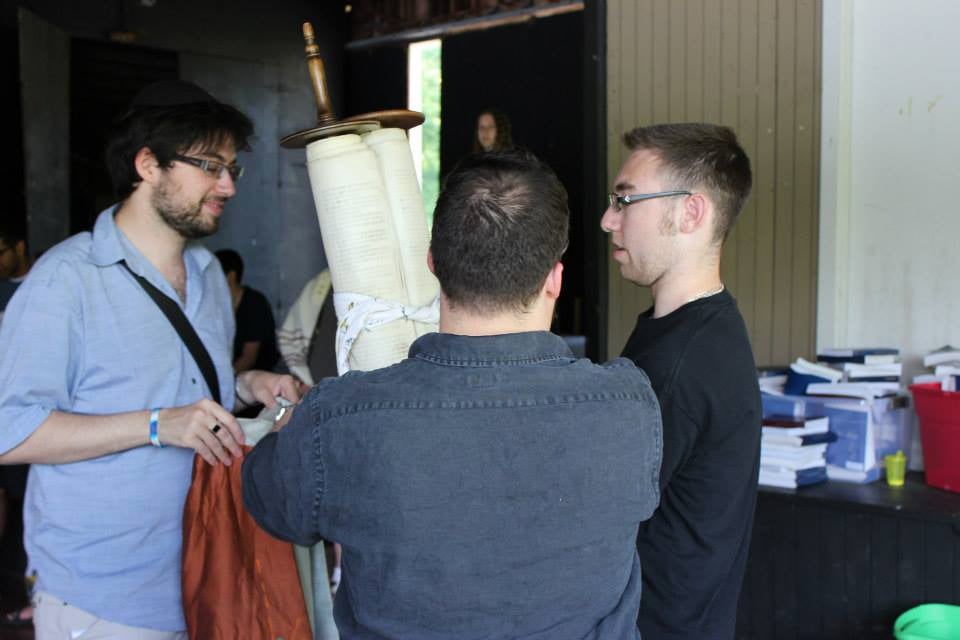 Andrew Keene, who was vice-chairman of the camp board, recalled that Maxa had come to the camp in 2013 and 2014 and had since been ordained in Potsdam, Germany, through Abraham Geiger College, a rabbinical seminary. affiliated with the reformist movement.

Keene called Maxa and asked if his new congregation needed a Torah scroll.

The Maxa congregation, called “Ec Chajim” or “Tree of Life”, was founded by a group of young Jewish couples. At first, the group held Shabbat dinners at each other’s homes. Then they held services in hotels and on ships. Last year, the congregation finally rented a space but couldn’t meet due to the coronavirus pandemic.

There are an estimated 3,000 Jews affiliated with Jewish institutions in the Czech Republic these days, but up to 20,000 others may no longer have any connection to their Jewish roots.

In addition to her work with the Prague Synagogue, Maxa works with Jews living outside of Prague to found two other congregations. 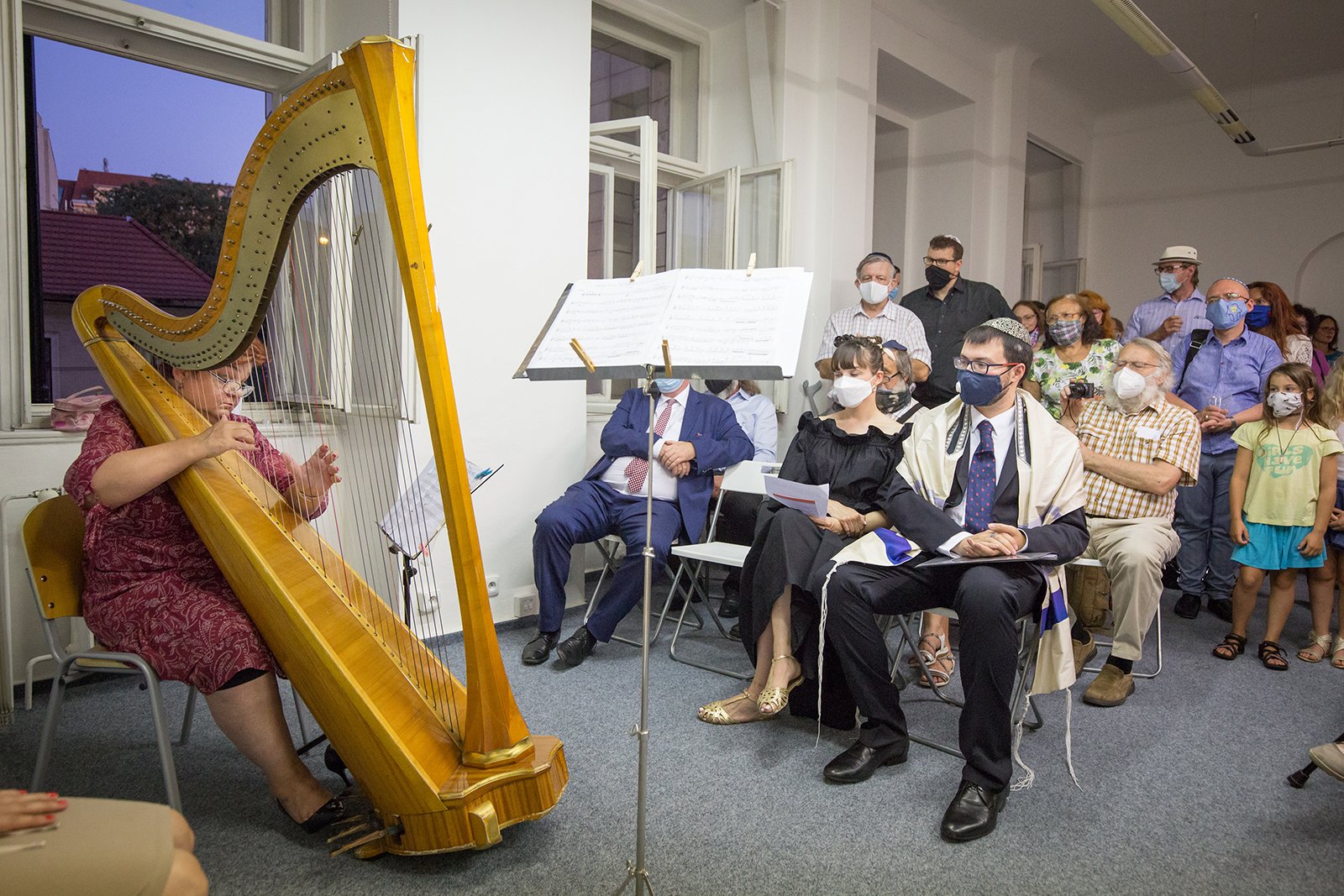 A harpist performs at the inauguration of the “Ec Chajim” synagogue in Prague, Czech Republic. Photo courtesy of Leona Kalvodová

“I have two communities in the countryside,” said Maxa. “People come up with similar questions: how can I find my Jewish roots, my tradition?

On Monday, Ohrenstein of the Memorial Scrolls Trust and Keene officially presented the Torah to the Prague congregation at Charles University. From there he was driven to his new home.

In keeping with tradition, members of the new congregation took turns holding the Torah and circling it around the building.

The parchment remains the property of the Memorial Scrolls Trust in London, but it will be on permanent loan to the congregation for as long as it is needed.

“Normally you think a memorial is in one place,” Ohrenstein said. “But the scrolls that arrived in London helped create 1,400 memorials around the world.”

This Saturday, alongside Jews around the world, the Czech scroll will serve more than a memorial. It will be part of a new cycle of liturgical readings – starting with Genesis 1, verse 1.

RELATED: What Are The Great Jewish Holy Days? A look at Rosh Hashanah, Yom Kippur and a month of celebrating renewal and moral responsibility